Artists Who Animate was born in 2014 out of a collaboration between two artists: Brent Eviston and Steven Vander Meer. 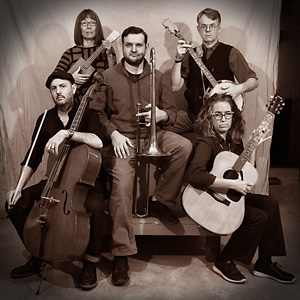 The two artists had just finished a collaborative project called Kinetic Convergences, it featured Brent's conceptual drawings and Steven's animation. The effort took many months and lots of meetings, and when it was complete, they decided that continuing to meet to discuss animation was desireable. Other artists were invited and a core group formed with the addition of Amy Uyeki, Julie McNiel and Kyle Couture.

Early on, the group began experimenting with The Black Dot - an exercize where individuals would create segments of animation that would all begin and end on the exact same image - a black dot. The short segments could then be hooked together to form a longer short film.

Fun as it was, The Black Dot was not enough of a goal to keep the group's enthusiasm and creativity flowing, they needed a bigger project. So for the next two years, the five core members worked diligently to product a gallery show called Artists Who Animate. The show opened in January of 2018 at the Morris Graves Museum of Art in Eureka, it used all three of the Museums galleries and boasted five projectors, seven flat screens, four zoetropes, a dozen mutoscopes and many pieces of 2-D art that went into the animations.